This landscape project had its roots in 2006 when Magnuson Community Center Coordinator Karla Withrow and landscape designer/nature educator Emily Bishton came up with an idea for a program to enable families and other small groups to easily explore the park on a self-guided tour.  Within a year, the first 2 “Birds of Magnuson” Explorer Packs were complete: chock full of everything needed for a fun-filled park adventure: binoculars, easy-to-use identification guides, books, games, and a 14-page activity guide for children to use during their explorations and then take home.  These packs have been a big hit with families, and were even written up in the Seattle Times on 3/24/07! (They were followed by a set of “Wetland Discoveries” Explorer Packs, which debuted soon after the Magnuson Wetlands Complex was completed in 2009). 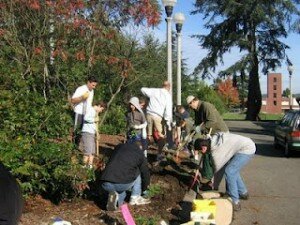 Soon after the “Birds of Magnuson” Explorer Packs were completed, Karla and Emily began brainstorming  on another idea; to create an educational, bird-friendly demonstration landscape at the Community Center itself. The Community Center is located right in the heart of the Magnuson Historic District in building #47, the former Navy Recreation Center.  It is a fantastic resource for the community, with a large auditorium, gymnasium, and meeting room, and the site of wonderful programming for children and families.

However, the landscape beds around the building were not very attractive or welcoming to visitors. Directly in front of the building was a 150 ft. long, half-moon shaped island bed, filled with an 8ft tall thicket of native Nootka Roses that was smothering every other tree and shrub around it. Even though these roses do provide good food and shelter for some of our native birds, they were a classic case of “wrong plant-wrong place”. The birds that feed on these rose hips do not inhabit this part of the Historic District, and so the hips were just rotting on the canes each winter, uneaten. Many of the other plants in the bed were natives that provide excellent food and shelter for the native birds that frequent the Historic Disctrict, but had ceased to bloom or bear well because they were being shaded out by the roses , and some were being killed. On top of all this, any bits of paper, plastic, or other trash that blew into the bed were instantly impaled in the impenetrable thorny rose thicket, which was nearly impossible for parks staff to maintain. 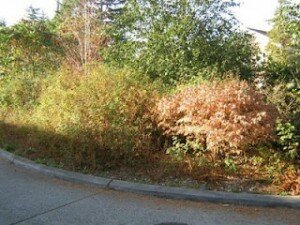 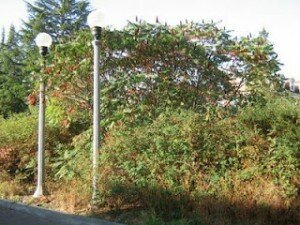 Once the plans were given the green light by the Magnuson Community Center Advisory Council and Magnuson Grounds Crew Chief Don LaFrance, Emily began recruiting volunteer groups to help carry out the landscape installation. 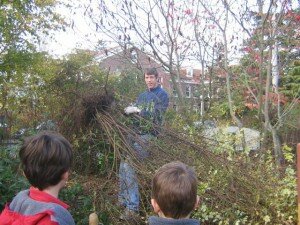 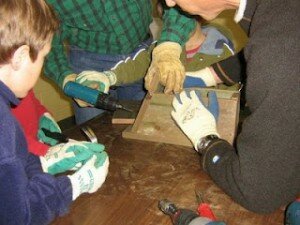 Beginning in the fall of 2007, volunteers began the difficult task of removing the Nootka Rose thicket. Words cannot express the transformation that began as the YMCA “Y-Guides” dads and sons, Seattle Works volunteers, and other stalwart souls dug and pulled until the plants that had survived the smothering thicket of Nootka Roses were finally free. Most of the Roses were dug with root systems intact, and taken to the North Shore restoration area by Park staff where they were re-planted along the lakeshore as a wonderfully protective thicket for waterfowl. 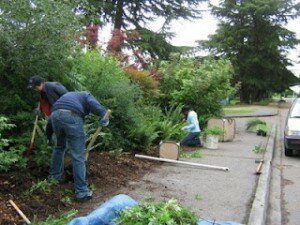 In March 2008, the Y-Guides dads and sons came back to build and install 2 Chickadee birdhouses in the landscape. Later that spring, two more Seattle Works groups came to remove the few roses that had re-sprouted, and build a new seating area, solar-powered water feature, and rain garden. The renewed vigor of the trees and shrubs in the landscape that now were receiving all the sunshine they needed was astounding to see; each produced more and larger flowers, which provided an abundance of nectar for hummingbirds, bees, and butterflies. The resulting berry, fruit, and seed production almost tripled, providing food for the Anna’s Hummingbirds, Black-capped Chickadees, Spotted Towhees, American Robins, Song Sparrows, Northern Flickers, and other birds that continued to visit the landscape despite the “construction project”. 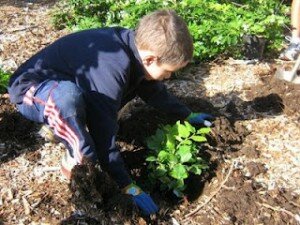 In the fall of 2008, the Y-Guides, Seattle Works, and other community volunteers returned to install an understory of of Salal, Low Oregon Grape, Evergreen Huckleberry, Sword Fern, Serviceberry, and other native plants throughout the open areas of the landscape to provide additional sources of food and shelter for the birds of Magnuson Park.  Then they mulched the entire bed with a deep layer of wood chips to protect the soil from compaction and provide habitat for beneficial insects to overwinter.

In the spring of 2009, colorful and educational signage was installed, and a brochure created, to enable all visitors to take a self guided tour and learn about birds that visit in the landscape.  The gorgeous graphic design work by local artist Robin Hing makes these elements a real standout.

On May 10th, 2009, the Bird-friendly Landscape was dedicated in a lively celebration, kicked off by the New Old Time Chautauqua Marching Band, who paraded up to the Community Center accompanied by jugglers, clowns, and tree-costumed revelers! 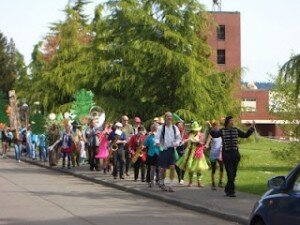 The number of bird species that visit the garden continues to increase each year, as the native plants have grown and produced a bounty of fruit and seeds that attract and nurture them. Since 2009, Chickadees have nested in the boxes created by the Pocket Gopher volunteers, and raised their young in this little urban treasure.

From 2009-2015, the Bird-friendly Landscape was maintained by volunteers from Seattle Works, the Magnuson Nature Docent program, and children who added their stewardship and care during camps and field trips. It is now maintained by the Magnuson Park grounds crew staff.

The Explorer Packs and the Bird-friendly Landscape were funded by a grant from the Eddie Bauer Corporation to Magnuson Park, for the purpose of creating environmental education and beautification.